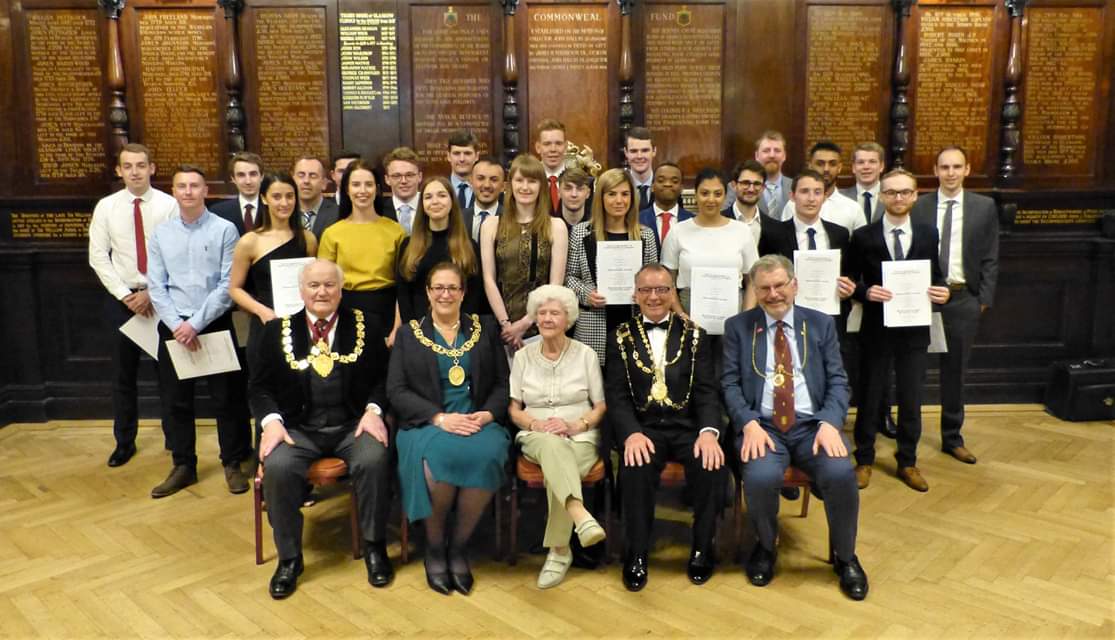 Thursday 25th of April was the key event for the Hammermen to award the prizes to the students who have been selected by their institution to represent them in this annual prestigious event.

There were representatives for 6 Further Education Colleges and 4 Universities of the area of the West of Scotland eligible to apply.  Attending the event were the three most important people of Glasgow, as described by the Deacon of the Hammermen, Professor Gordon Masterton OBE; The Right Honourable Lord Provost, Councillor Eva Bolander, the Lord Dean of Guild,  Iain Dickson BEM, and the Deacon Convenor of the Trades House, Tom McInally.

Prizes where awarded to the following students by the Deacon Convenor once they were announced by the Master Court Member, Dr Nina Baker.

All winners of each category have been invited to submit their 500 word essay for the Prince Philip Award.  There is an award for College students and another for University students, each worth £1500.  In addition to the essay applicants will be subject to an interview by at least 2 Members of the Master Court in May with the winners being awarded their prize at the Hammermen’s Annual Dinner in December 2019.

Not diminishing the achievements of our younger engineers perhaps the most significant attendee at the award ceremony was Dr Janet (Netta) Harvey who worked as an electrician on the very busy Clyde shipbuilding industry during World War 2. At that stage in history it was not normal to have women engineers, particularly in the crafts section of the industry.  Netta pointed out that she was called-up just like the men were and given 3 choices: a welder, an electrician or the land army, and she chose electrician. Netta also suggested she and her 3 other female electrician were more dexterous in wiring the ship than the men and she suggested that their knitting skills ma have helped.  Something to note for FE Colleges: maybe electricians and other skills should include knitting in the curriculum!

As well as the honorary membership of the Glasgow Hammermen, The Right Honourable Lord Provost of Glasgow, Councillor, Eva Bolander, awarded Netta with her certificate as Burgess and Guild Sister of the City of Glasgow for the significant effort she made in the war effort but also in the notable lifting of the veil that women are capable of being competent and well able to be engineers.

Scroll back to top